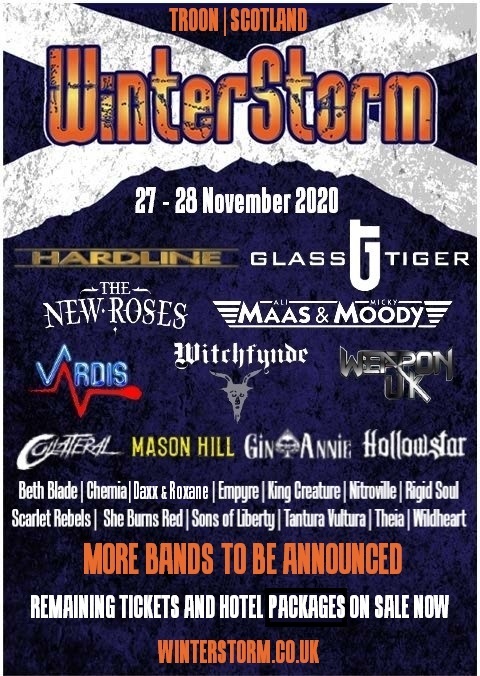 Ach it's Friday and nearly the weekend so we'll sneak this addition in! We weren't sure we'd get this signed off today but we have and it's a great add to the mix - WinterStorm can always do with a bit good of the blues and we think you'll agree this is pretty classy!

Touching on 1980 again, Moody combined with Marsden to create some of the most memorable Apollo guitar performances that year and we're delighted to have Micky back in Scotland performing with the wonderful vocals of Ali Maas.

Ali Maas and Micky Moody (and band) add another dimension to an already eclectic weekend of rock.


Okay, we're just about there for the first part of our WinterStorm 2020 reveal. We've got four real crackers still to release but for now this one is again just maybe a little left field again - and on this occasion we make no apologies for it!

One of those bands that would be probably best known for their mid 80's hit Don't Forget Me (When I'm Gone) but have produced so much more.

When we saw that Glass Tiger were in Europe playing in Germany this November we had to approach them. Definitely a departure but we believe a complementary departure and a set that fits in perfectly with the different genres around them.

Lead singer Alan Frew, "Cliché as it sounds, you can take the lad out of Scotland but, “ Ye cannae tak’ Scotland oot o’ the lad.”

What a thrill to know that Glass Tiger is heading to the land of my childhood to perform in November. It’s been long, LONG, overdue. What a truly heartfelt honour. I promise you, we will NOT disappoint. Hope to see you there!"

Pretty safe to say that Glass Tiger will be a first for almost the whole audience but we're sure they'll leave a mark and add a new dynamic to the Friday night.


We've always tried to mix things up a wee bit at WinterStorm and when we look back to the bands over the past couple of years we've maybe been light on some melodic rock. Debatable maybe but it's a comment that's been levelled at us.

It's never been far from the core of the event though and one of the things that we hope the fans like is the diversity of the line up and the chance to see bands that you may never have heard or seen or who don't get to these shores very often.

Having witnessed this lot steal the show at Frontiers in Italy last year we really wanted to see whether we could get them over form The States. The first line up included originally formed in 1991 consisted of five members, Johnny Gioeli, Joey Gioeli, Neal Schon, Todd Jensen and Deen Castronovo.

The current line up may have changed but the essence of the band has remained true and WinterStorm is going to be treated to a full on American rock n roll show from the superb Hardline!


1980 has always been on our mind. It's been on our mind since we first kicked this adventure off in 2016. For so many of the Scots who attend the Ayr Pavilion and The Apollo were second homes in 1980 and for so many it provides great memories.

Praying Mantis were the first band booked for any WinterStorm; Tygers followed and since then we've had Rock Goddess, Girlschool, Quartz, Diamond Head, Oliver Dawson Saxon and a bit of Gillan from the much loved and missed Bernie Torme.

This year has that 80's thread running through it again and the February reveal will reinforce that further but for now it wouldn't be WinterStorm without a bit of NWOBHM now would it?

Yes it may be pure nostalgia but hell who cares...

Ladies and gentlemen please start a bit of headbanging for Vardis, Witchfynde and Weapon UK! 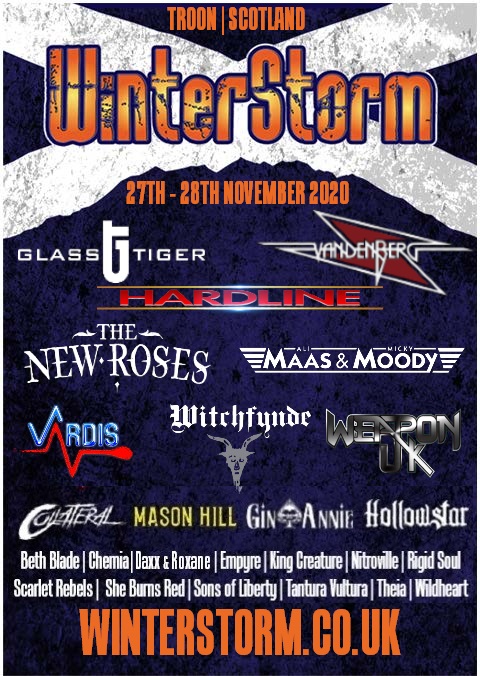